Marking a significant Millennial Moment in the history of the UAE, around 5,000 devotees and well-wishers thronged to participate in and witness the foundation stone-laying ceremony of the BAPS Hindu Mandir. Volunteers began to arrive at the site location as early as 6:00 a.m., with participants arriving at 8:00 a.m. The Shilanyas Ceremony, which is an ancient Vedic ritual performed to bless and sanctify the main foundation stones, commenced at 9:00 a.m. This ceremony signifies the beginning of the construction of the Mandir.

The Vedic ceremony was performed by His Holiness Mahant Swami Maharaj, the spiritual leader of BAPS Swaminarayan Sanstha. The occasion was also graced with the presence of His Excellency Dr Mugheer Khamis Al Khaili, Chairman of the Department of Community Development and Member of the Executive Council, His Excellency Dr Thani Ahmed Al Zeyoudi, Minister of Climate Change and Environment, and His Excellency Dr Ahmad Bin Abdullah Humaid Belhoul Al Falasi, Cabinet Member and Minister of State for Higher Education and Advanced Skills. Also present were His Excellency Navdeep Suri, Indian Ambassador to UAE, Vipul, the Consul General of India, and Dr. B.R. Shetty, Chairman of Mandir Ltd. After laying the foundation stones in position, water from the three main holy rivers of India – Ganga, Yamuna and Saraswati was poured on the stones by His Holiness and the distinguished guests.

The enthusiasm and devotion of all participants and volunteers was evident as they arrived for the Vedic ceremony.

Prior to the celebration assembly, His Holiness Mahant Swami Maharaj and the Ministers unveiled a Gift of Gratitude, an intricate piece of artwork comprising a base made of pink sandstone – the stone that will be used for building the Mandir and metal fins of various sizes forming an image of Sheikh Zayed bin Sultan Al Nahyan. The unique artwork celebrating the Year of Tolerance is a gift to The Crown Prince of Abu Dhabi, HH Sheikh Mohammed Bin Zayed Al Nahyan, on behalf of BAPS Hindu Mandir and the larger Indian community in appreciation of the support of the rulers and people of the UAE.

During the assembly, Pujya Brahmavihari Swami, a senior BAPS sadhu who is overseeing the construction of the Mandir in Abu Dhabi stated, “I would like to thank the King HH Khalifa Bin Zayad Al Nahyan and Crown Prince Sheikh Mohammed Bin Zayed Al Nahyan and all rulers and leaders who have shown so much love and extended their complete support”. He added that, “This Mandir is not just inspirational, generational but civilzational, bringing together two countries, two cultures, two communities and two religions. It will become ‘a spiritual oasis for global harmony’ in the middle of the desert.”

Indian Ambassador to the UAE His Excellency Navdeep Suri addressed the assembly, “It is an absolute honour to be in the midst of this journey which happens only once in a millennium.” He then read out a letter on behalf of Prime Minister Narendra Modi, which said, “When complete, this Mandir will symbolize the universal human values, and spiritual ethos that form a shared heritage of both India and UAE…. UAE is celebrating the Year of Tolerance. This Mandir, is an expression by the United Arab Emirates, of their love, friendship and faith in India and the Indian community.”

His Excellency Dr. Mugheer Khamis Al Khaili addressed the gathering: “It is my honour to stand here with you today to celebrate this day by laying the foundation of the Hindu Mandir. This constitutes a great relation between the two countries, nations and cultures. Our presence here today shows the really strong relationship between the two nations. This Mandir reflects the greatness of tolerance.”

Dr. B.R. Shetty, Chairman of Mandir Ltd then thanked Sheikh Mohammed, Sheikh Nahyan, and Sheikh Zayed as well as the government and community for their whole-hearted support of the Mandir.

In conclusion, His Holiness Mahant Swami Maharaj blessed the assembly, “Right now, peace, love and harmony are all over this campus. We cannot buy peace with money or intelligence. Peace comes to those who love peace. May goodness and peace spread further from here.”

The event was meticulously planned by volunteers of all walks of life living within and outside of the UAE. Small children could be seen serving the community by meticulously organizing shoes, lady volunteers were helping with decorations, food distribution and ushering the public to the venue. Additionally, the contribution of youths from the UAE, US, UK and other countries illustrated the significance of this landmark community project and the spirit of service embedded within the BAPS fellowship.

After the conclusion of the ceremony and assembly, throughout the day over 17,000 devotees and well-wishers from numerous spiritual and social organizations, including Art of Living, Chinmay Mission, Jain Samaj, Dubai Gurudwara, Brahma Kumaris, Iskcon, Ayappa Samaj, Tamil Samaj and all others, visited to offer their respects and devotion.

This historic event was attended by devotees, volunteers and well-wishers from India, USA, UK, Europe, Japan, Africa, China, South East Asia, Australia and many other countries. 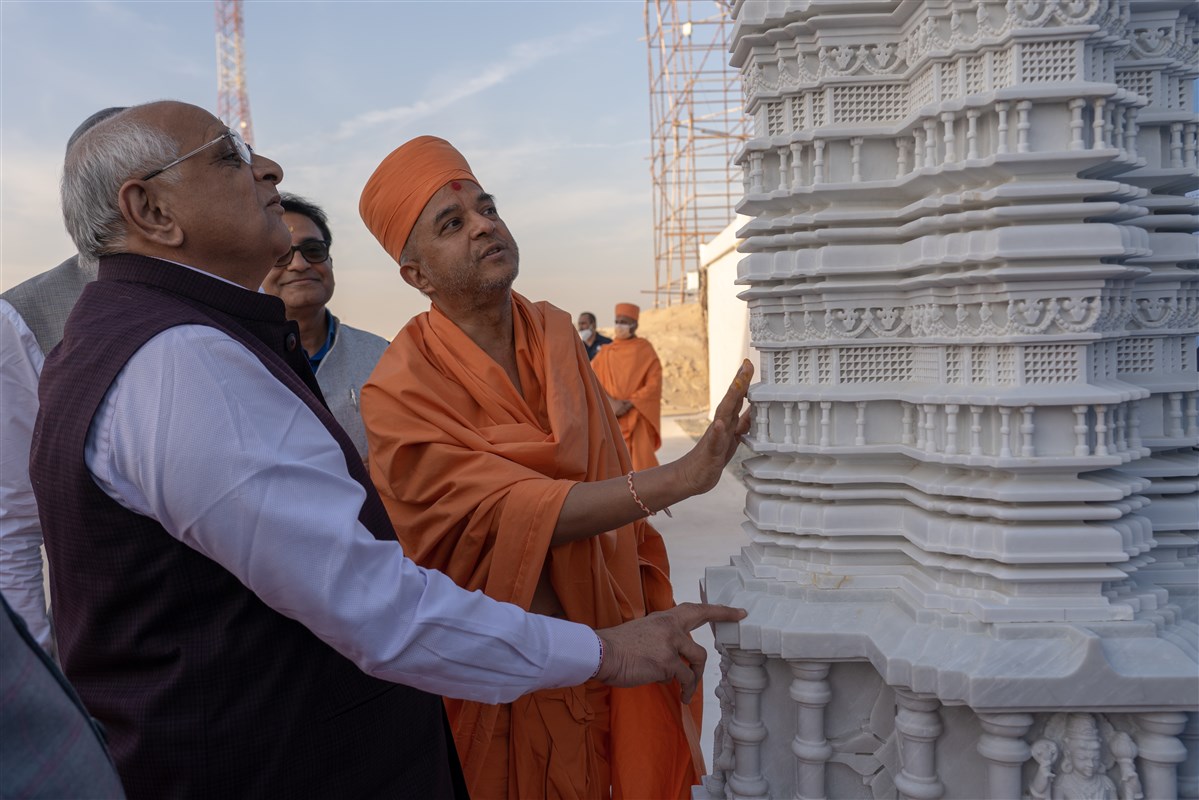 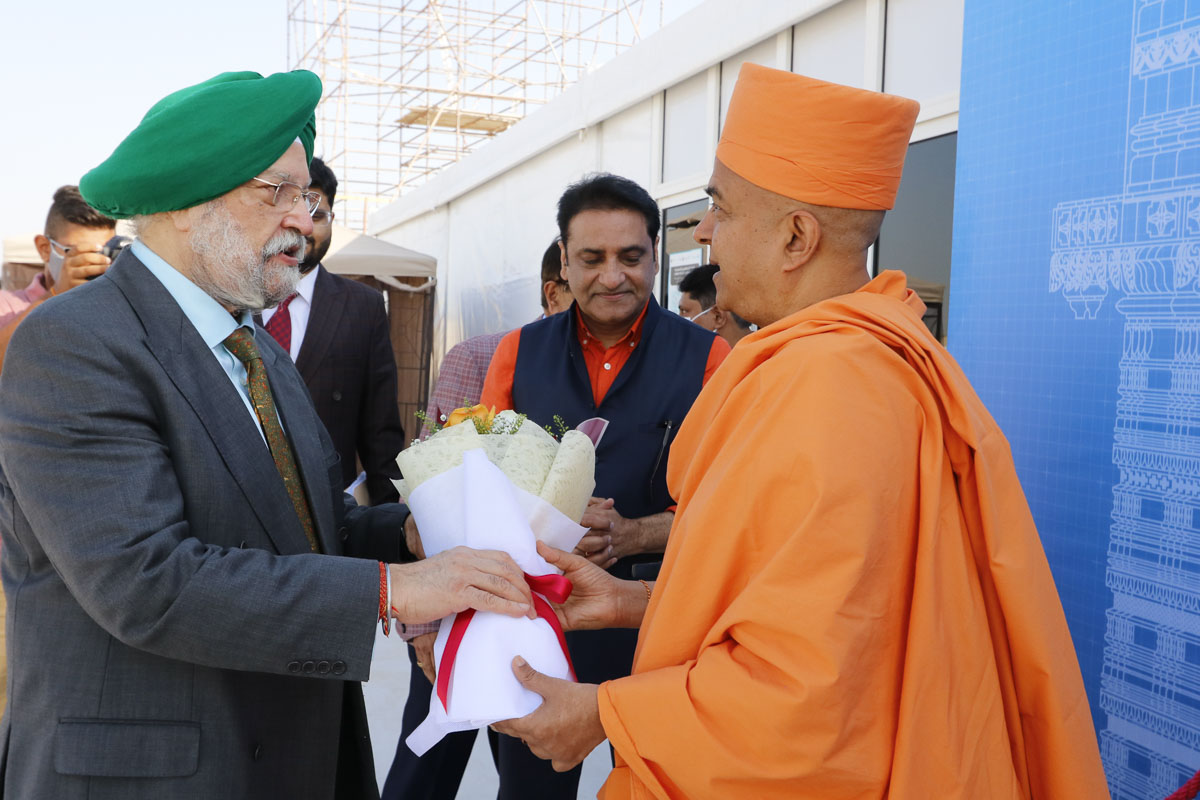 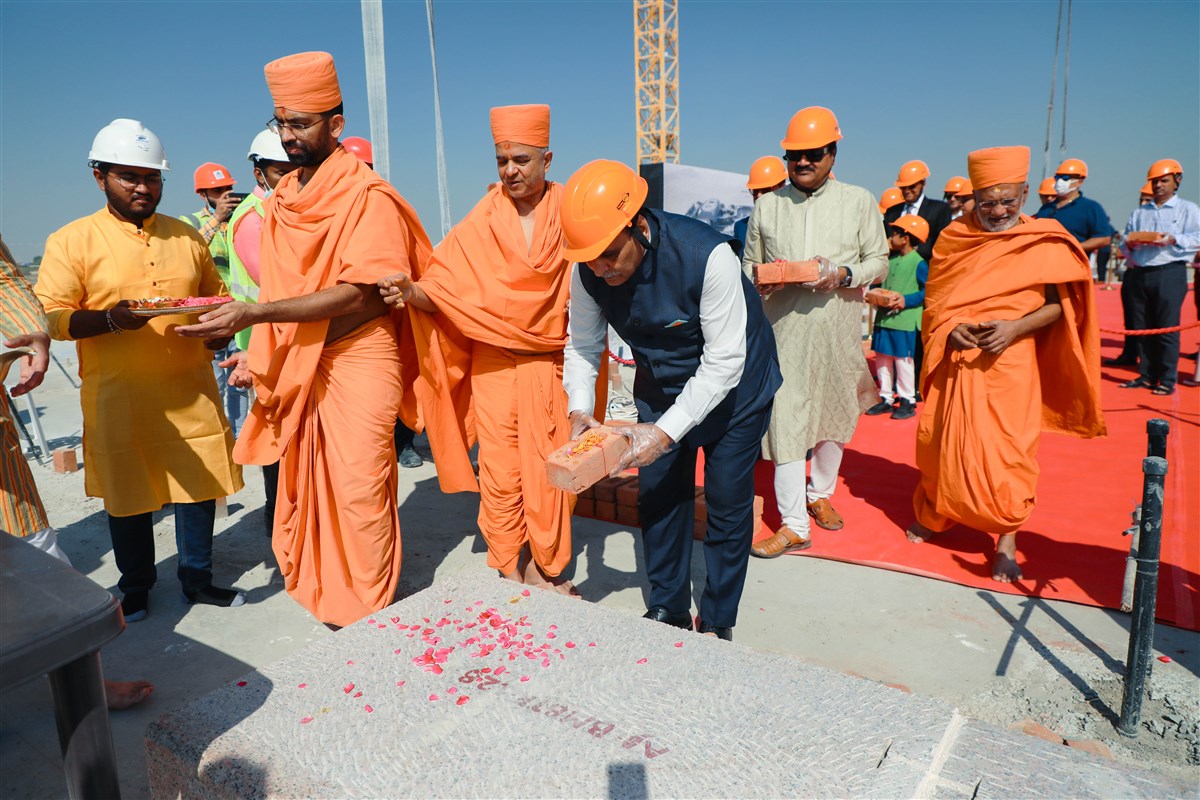 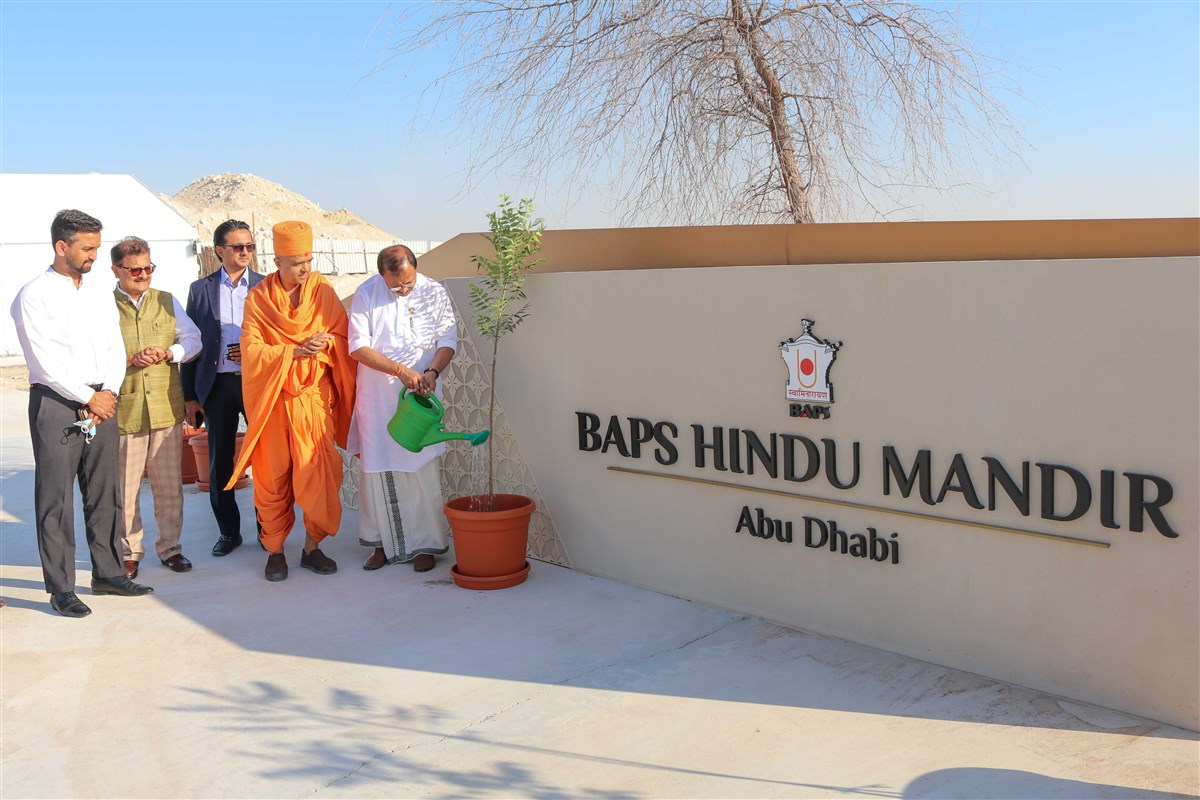 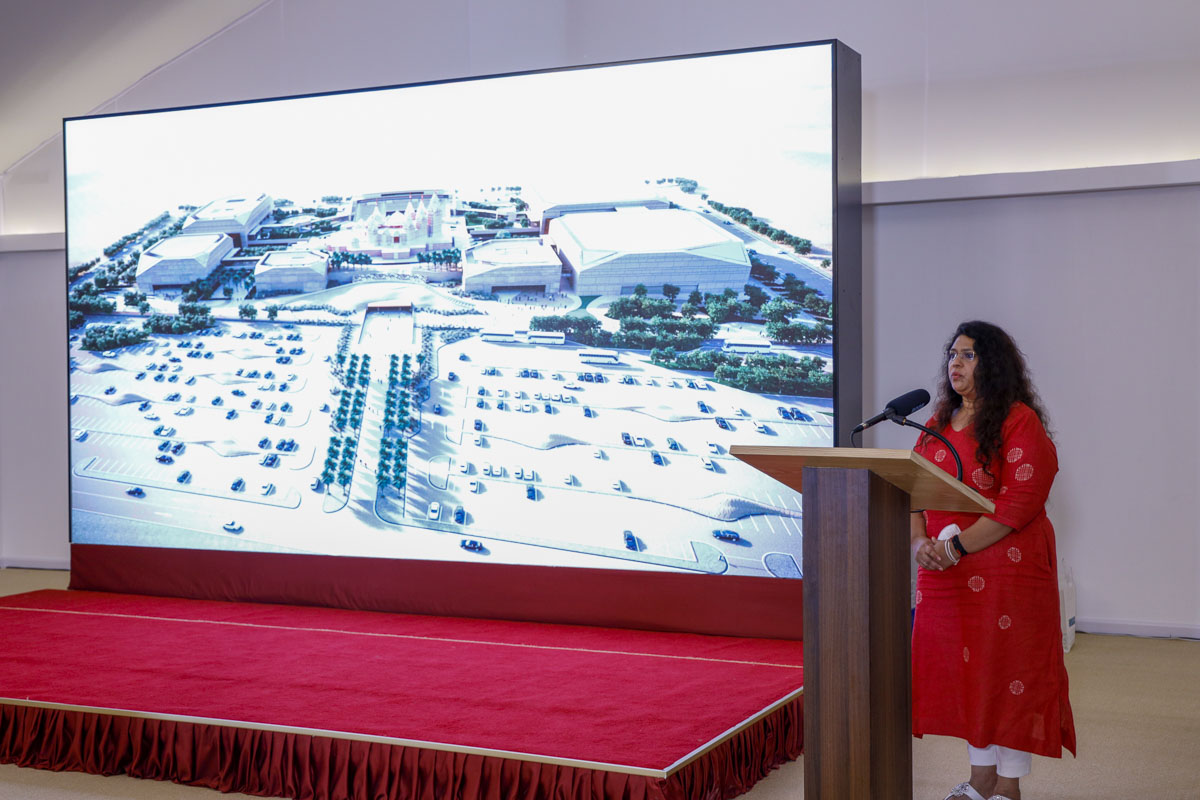 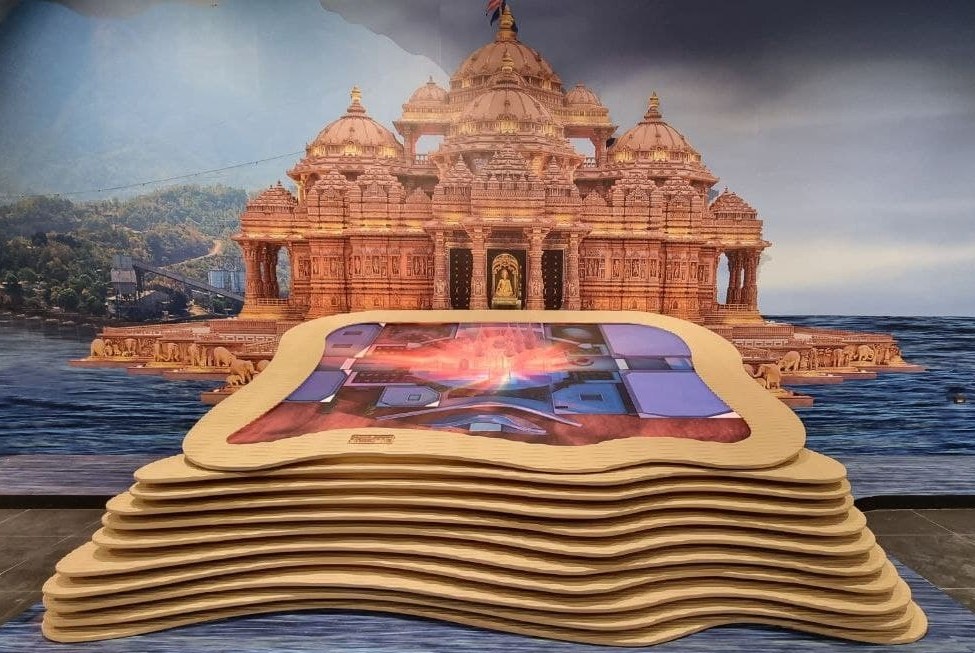 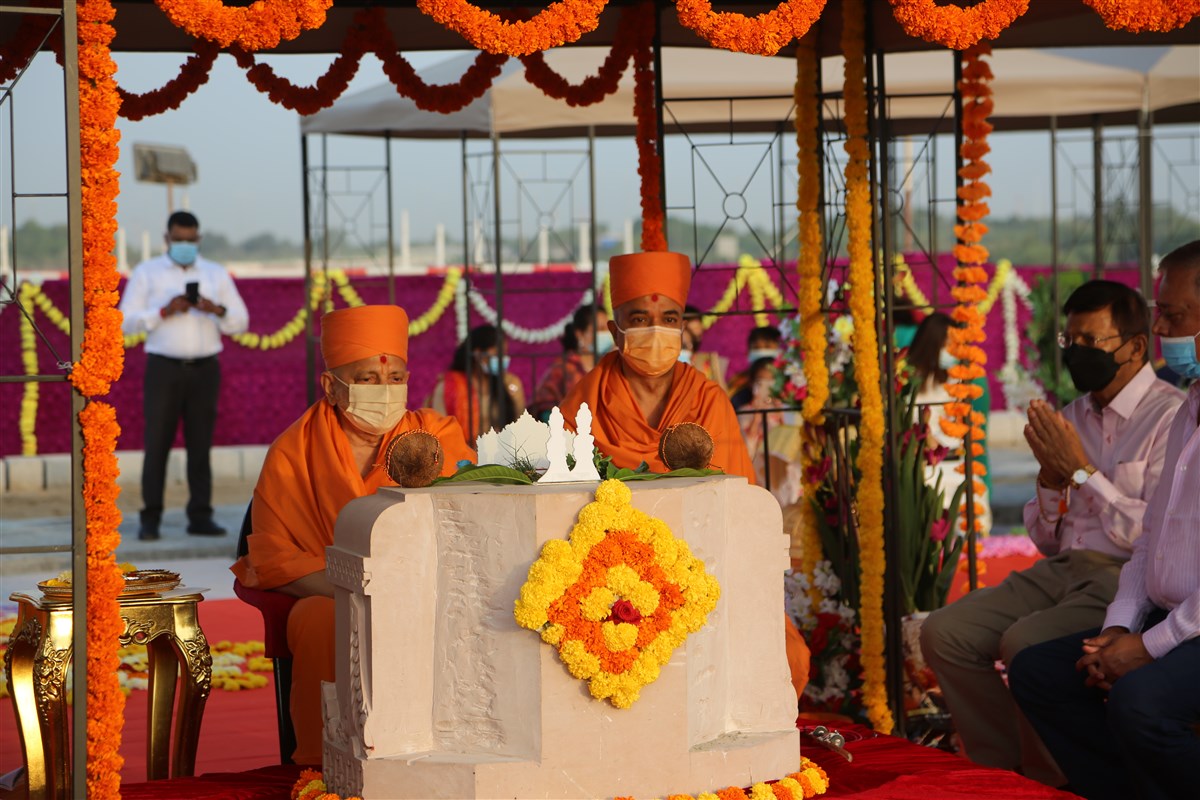 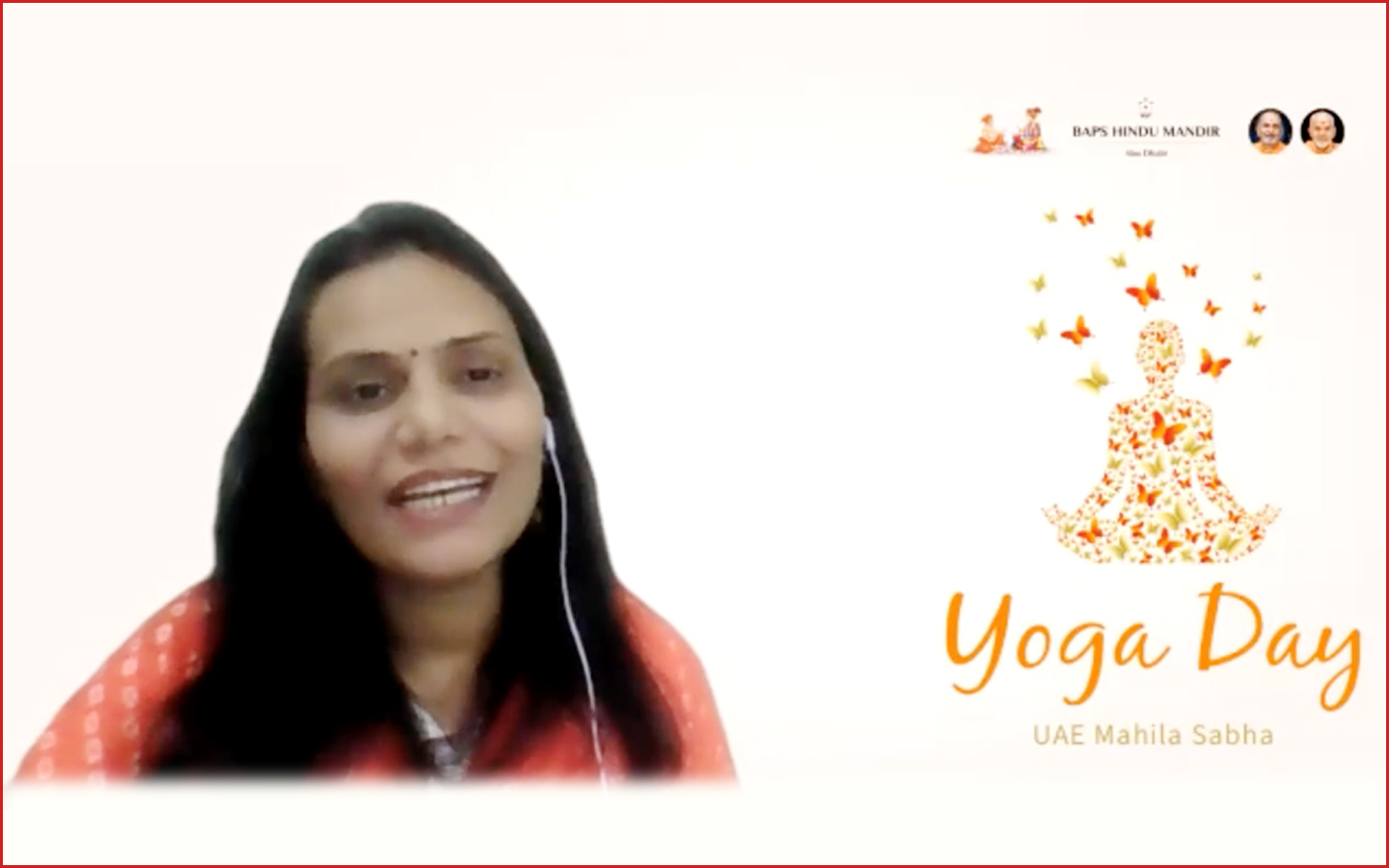 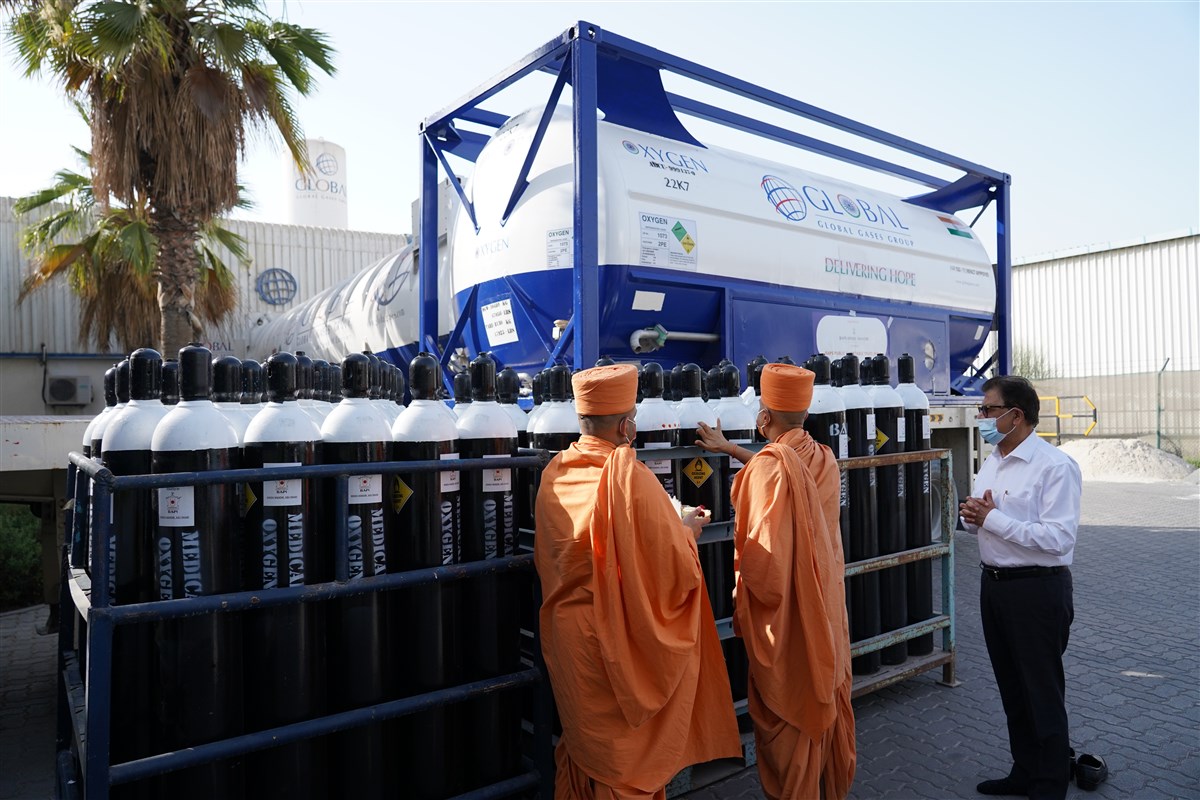 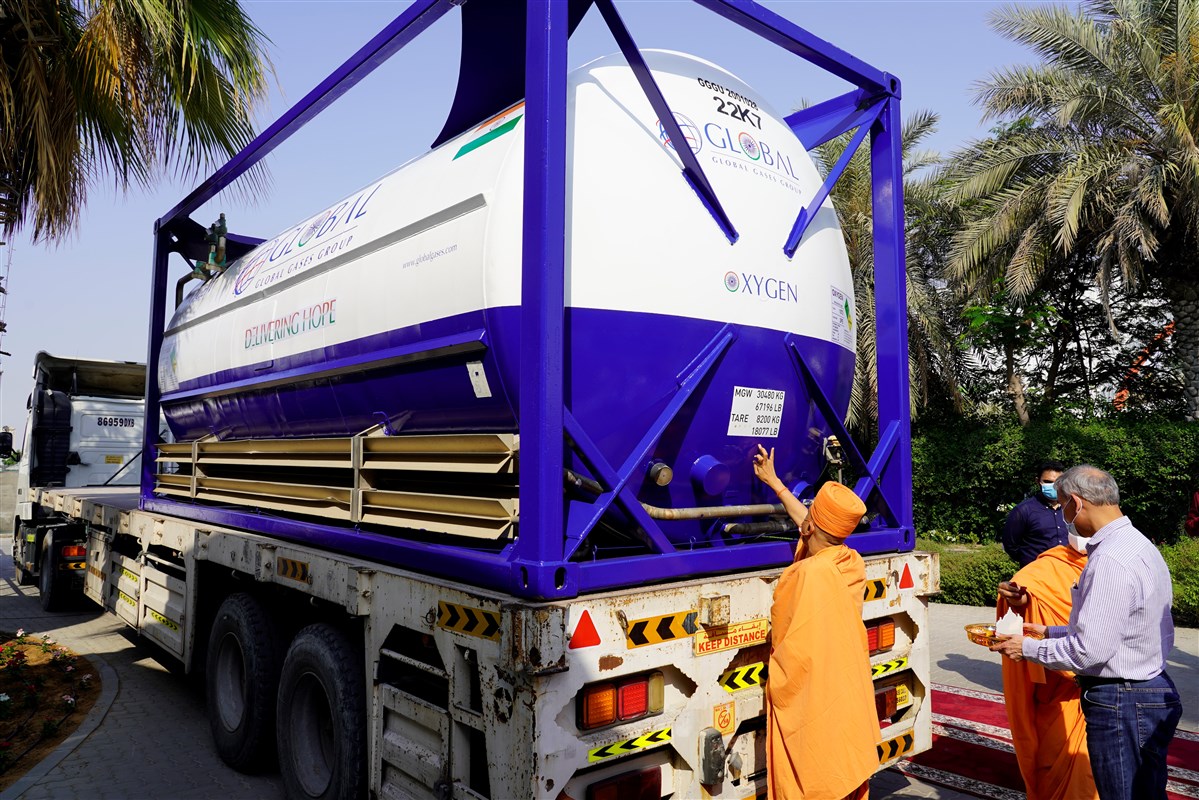 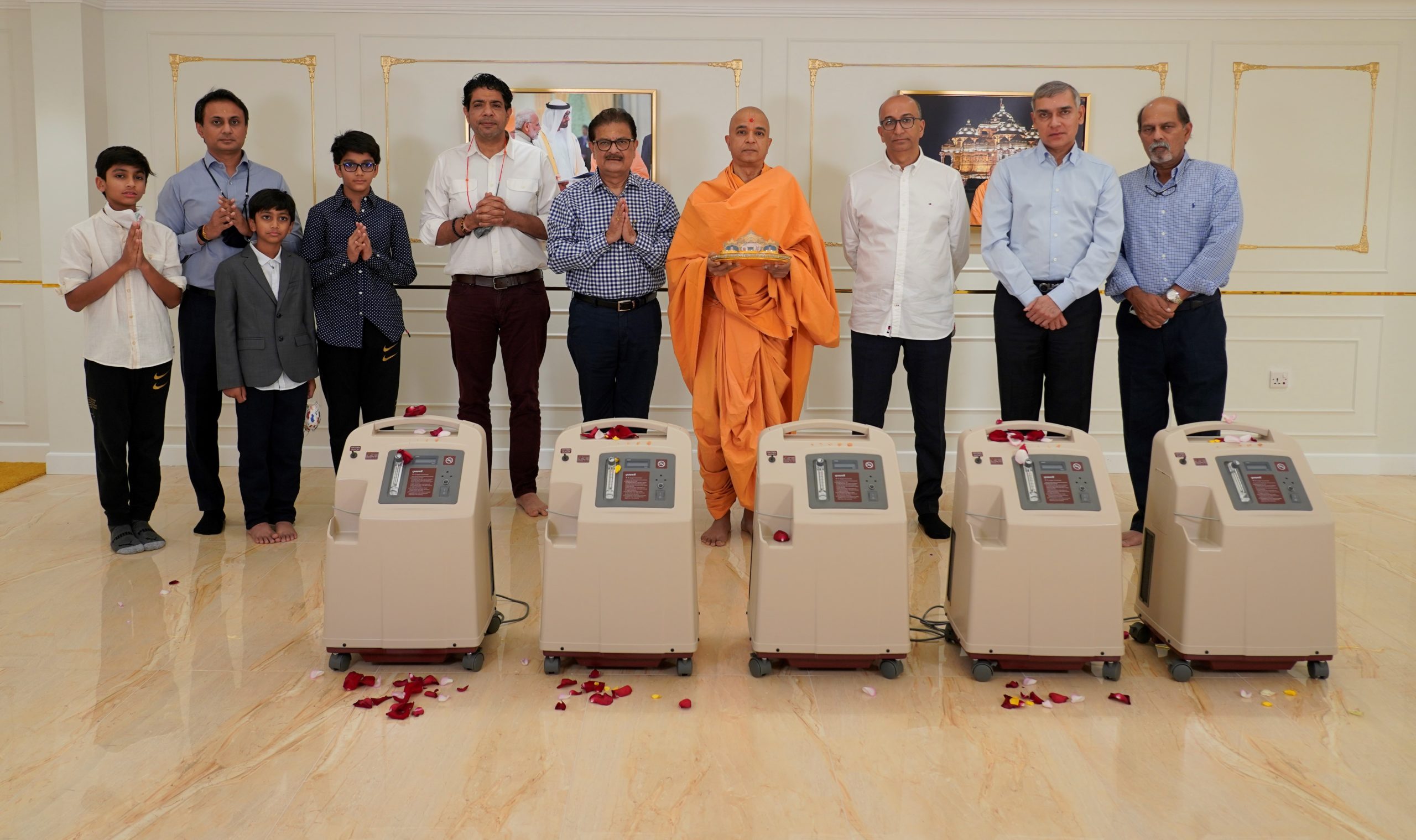 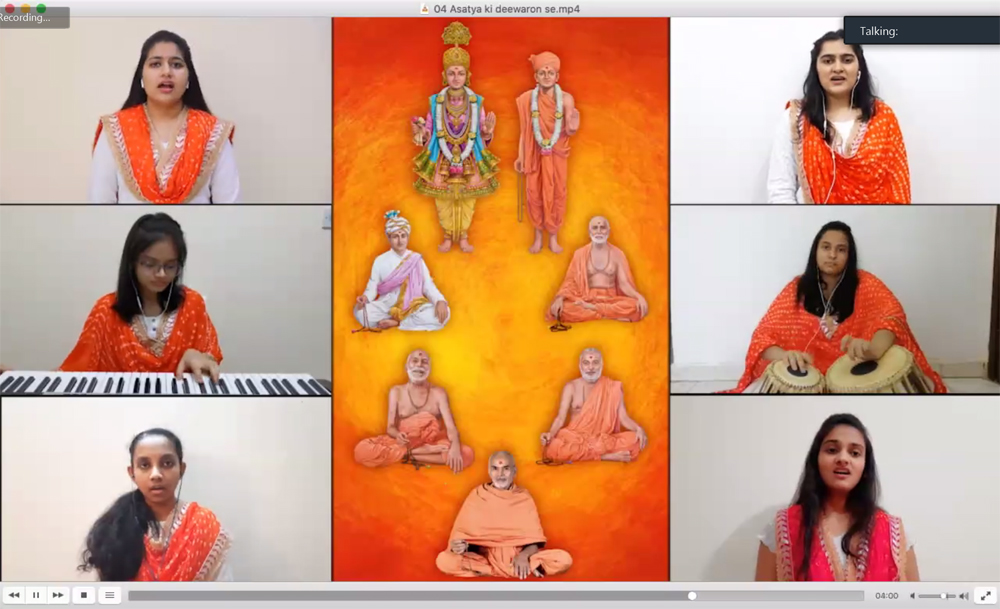