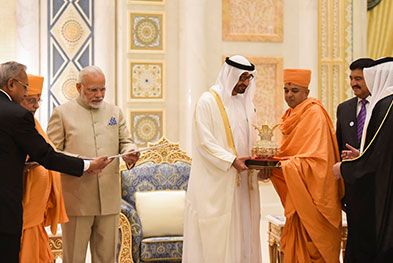 To express their gratitude to the Crown Prince for his generous gift of land and wholehearted support for the BAPS Hindu Temple, the chief coordinators of the temple, Sadhu Ishwarcharandas and Sadhu Brahmaviharidas, and Temple Committee members met HH Sheikh Mohamed bin Zayed al Nahyan and the visiting Prime Minister of India Shri Narendra Modi in the Presidential Palace. After the signing of the MOUs between the two nations, the temple was officially announced in the presence of the entire royal family and over 250 local leaders comprising of ministers, government officers and military personnel.

The whole gathering welcomed the news with a standing ovation as HH Sheikh Mohamed bin Zayed al Nahyan assured the sadhus, who presented a golden kalash – the vessel of immortality, that you are like our brothers and the temple should be iconic, grand and traditional. He also asked them to pray for him, his children and his grandchildren. In conclusion, Sadhu Brahmaviharidas thanked him for his generosity, Shri Narendra Modi for his integrity and assured that the temple and the surrounding cultural and spiritual complex shall strengthen universal understanding and interfaith harmony, and will also nurture the children of today and coming generations towards a brighter future.