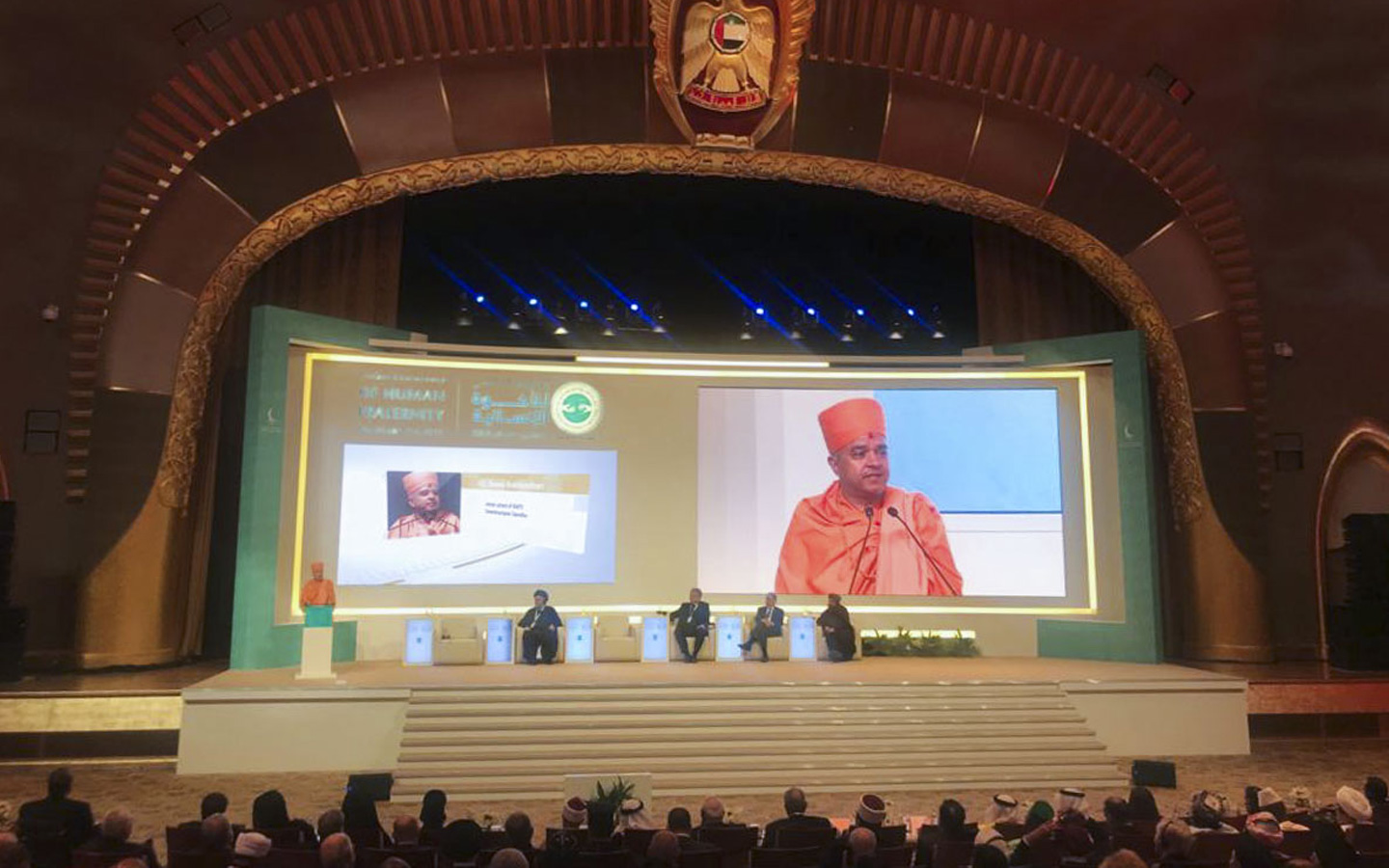 Celebrating 2019 as the Year of Tolerance, the UAE organized a historic Global Conference of Human Fraternity in conjunction with the visit of His Holiness Pope Francis, first ever to the UAE by a sitting pope. The two-day conference, held at the regal Emirates Palace Hotel in Abu Dhabi, was the first of its kind in the Arab world, and was graced by more than 700 religious leaders, clerics and scholars representing the Muslim, Christian, Jewish, Hindu, Sikh, Buddhist and other faiths from across the world. Representing the BAPS Swaminarayan Sanstha, Pujya Brahmavihari Swami was specially requested by the Royal Court to deliver the keynote address in the inaugural session in this unique conference hosted by the Muslim Council of Elders under the patronage of the Crown Prince of Abu Dhabi His Highness Sheikh Mohammed bin Zayed Al Nahyan.

Inaugurating the conference on 3 February, HE Sheikh Nahyan bin Mubarak Al Nahyan, UAE Minister of Tolerance, said, “This gathering enables us to counter the extremism, prejudice, hate, aggression, greed and oppression that violate the very idea of human fraternity.”

Following His Excellency on stage, a panel of eminent religious and spiritual figures gave their views on how the world can live as one community by instilling tolerance and love. The notable speakers included Secretary General of the Arab League – HE Ahmed Aboul Gheit from Egypt, Founder and President of the Arab American Institute – Dr James Zogby from US, General Bishop of the Coptic Orthodox Church – His Beatitude Bishop Yulius, Secretary-General of the World Council of Churches – Rev. Dr Olav Fykse Tveit from Norway, Member of the Muslim Council of Elders – HE Ali Al-Amin from Lebanon, and Senior Saint of BAPS Swaminarayan Sanstha – Pujya Brahmavihari Swami from India, who delivered a scintillating keynote speech that emotionally moved the international audience.

HE Ahmed Aboul Gheit said, “The Global Conference of Human Fraternity celebrates the essence of humanity and diversity.”

Dr James Zogby said, “This historic event has gathered hundreds of leaders from every part of the world to discuss the oneness of humanity.”

His Beatitude Bishop Yulius said, “Fraternity among diverse people is the safety valve that preserves human existence. Dignity is a virtue God has afforded everyone regardless of nationality or religion.”

Rev. Dr. Olav Fykse Tveit said, “We are all members of one human family, it is our responsibility that we all reflect God’s love for man and live as one family for the sake of mankind.”

HE Ali Al-Amin said, “The UAE has set a perfect example of tolerance and peaceful coexistence among diverse communities. This gathering reinforces the human bond, calls for dialogue between all nations and religions, and rejects fanaticism.”

Pujya Brahmavihari Swami concluded the session, touching upon the truth of human fraternity, “Until we humans learn to happily talk and walk with one another, share and care for each other, even boundless progress and prosperity will still be worthless…. Of what use is upgrading the world, if we downgrade human lives and relations?” Further, he emphasized, “All essential elements – sun, earth, water, air and space are universal. If Creation is universal, then the Creator is universal and so should be all religions, as they are the pathways to God.” He went on to add, “As home to more than 200 nationalities, the UAE is a model of peaceful coexistence. Tolerance in the UAE is a verb, not a noun. It is seen in action every day. The country has set up ministries for tolerance and happiness, created policies, laws and regulations, and is celebrating a whole year. Tolerance in the UAE is not cosmetic, it is not skin deep; it is the very soul of this country.”

Pujya Brahmavihari Swami seamlessly elaborated the all-embracing outlook of Hinduism, expressed gratitude towards the Rulers of the UAE and remembered his Guru His Holiness Pramukh Swami Maharaj’s speech in the UN Millennium World Peace Summit in 2000 which highlighted the importance of interfaith dialogue. As the ultimate example of fraternity, he narrated an eyewitness account of the ideal friendship between Dr. APJ Abdul Kalam and HH Pramukh Swami Maharaj, which transcended all barriers of position, profession, education, language and religion. Pujya Brahmavihari Swami further explained his own experience within the UAE. “I stand here as a witness to the UAE’s tolerance and inclusiveness by granting land for the BAPS Hindu Mandir.”

The UAE’s spirit of global harmony was at the forefront of this first Global Conference of Human Fraternity which was hosted by The Muslim Council of Elders, with an inaugural keynote address by a Hindu sadhu and the concluding address by HH Pope Francis at The Founder’s Memorial. The message of peace, harmony and fraternity was loud and clear – “Either we build the future together, or have no future.”

On the occasion of Diwali 2022, His Highness Sheikh Abdullah Bin Zayed Al Nahyan, the Minister of Foreign Affairs and International Cooperation of the Un ...
Read More

The UAE launched The International Tolerance Alliance – a unique initiative, like the UN, that aims to bring together religious leaders, governments an ...
Read More

Over the last year, people from all parts of the globe have collectively helped craft harmony by participating in the brick by brick ceremony at BAPS Hin ...
Read More

This was a momentous week for the BAPS Hindu Mandir in Abu Dhabi. On 8 September, Pujya Ishwarcharan Swami and Brahmavihari Swami led 500 devotees, well ...
Read More